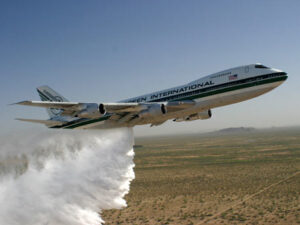 The Supertanker offers many dramatic efficiency improvements related to drop capability, mission diversity and response time. And, when it comes to costs, the Evergreen Supertanker will put out fires in less time, require fewer aircraft, flight missions and hours flown.

Advanced Drop Capability
The Supertanker’s significant loiter time will allow it to place a single large drop or various segmented drops at multiple intervals while in flight. This allows the aircraft to fight multiple fires on a single mission. And, depending on the mission’s requirements, the Supertanker’s versatile application system will disperse retardant under high pressure, for an overwhelming response, or drop retardant equivalent to the speed of falling rain.

Response Time
The aircraft will be fully loaded and on alert status 24 hours a day, 7 days a week. The Supertanker will be able to cruise at Mach .86 or close to 600 mph, getting to a fire much sooner than existing aircraft and well within the aircraft’s design limitations. Current air tankers, when fully loaded, are at their maximum design limitations which inhibit aircraft performance and maneuverability. In addition, a greater power to weight ratio provided by a Supertanker will enhance aircraft performance in all phases of flight.

The Evergreen Supertanker is not just limited to fighting fire. It will be a true utilitarian aircraft with the capability to configure to different applications on short notice. This multimission aircraft can support sensitive security and environmental missions. The aircraft’s exceptional drop capabilities, loiter time and size make it an ideal tool to perform challenging homeland security missions, able to neutralize chemical attacks on military installments or major population centers, and help control large, environmentally disastrous oil spills.

In addition, the upper deck of the Boeing 747 provides over 200 square feet of space that could be assigned as a command and control center. EIA possesses an FAA exemption number 1870C that permits the carriage of up to five individuals that are not crewmembers in the upper deck. This area is capable of providing space for command and control components that would assist in sophisticated mapping, incident monitoring and video/communications downlink relay that might require additional personnel over and above the required crew.

For decades the United States government has relied on aviation resources, primarily in support of ground forces, to combat large fires. But as the severity of the fire seasons have increased, so have the problems associated with the aging aircraft fleet.

Historically, just how severe is the wildfire problem? Since 1990, according to the National Interagency Fire Center (NIFC), 60,594,824 acres have burned in the United States. This huge area is equal to the entire state of Oregon, the nation’s 10th largest state, being destroyed by fire.

These fires have cost an extraordinary amount of money to combat. According to NIFC, which has compiled firefighting costs since 1994, over $6.9 billion was spent to suppress these fires. But the true cost of wildfire is much higher. These costs do not factor in cumulative wildfire costs, which include timber, tourism and property losses. If you factor in these costs, in 2002 alone, a year in which over 88,000 fires burned nearly 7 million acres, cumulative wildfire costs amounted to nearly $10 billion.

The Evergreen Supertanker’s drop capabilities, effectiveness, safety standards and operational flexibility are revolutionary. With guidance from appropriate agencies, Evergreen will assist state, federal and worldwide experts to redefine how fires are fought and emergency management missions are performed.

This aircraft is being built using scientific data and study with an emphasis on safety and effectiveness. To date, over 50 degreed engineers/scientists have invested an estimated 20,000 hours on this project.

Evergreen is not just developing a new aircraft. Instead, we have designed and will deploy the first true turnkey emergency response program capable of supporting a vast range of urgent missions worldwide.

With over 25 years of passenger and airfreight experience, Evergreen International Airlines, Inc. (EIA) has one of the largest all-cargo fleets in the industry. Worldwide, its fleet of 10 Boeing 747s offers full logistical support services. With Evergreen’s significant international route authority, superior safety record and over 416,000 hours of Boeing 747 experience, many of the world’s largest airlines and companies entrust Evergreen to perform charter services worldwide.

Evergreen maintains an unparalleled commitment to protect resources from the threat of fire. Evergreen’s diverse fleet of 54 light, medium and heavy-lift helicopters, 30 of which are available for fire suppression, allow it to perform firefighting missions anywhere in the world.

Our aerial fire suppression traditions actually go back to 1924, with Missoula, Montana-based Johnson’s Flying Services, which Evergreen purchased in 1975. In 1931, Johnson was awarded the first USFS Prime Contract for aerial fire work and introduced the first ‘smoke jumper’ aircraft, the famous Ford Tri-Motor. It maintained Forest Service contracts into the 1970s.

Johnson’s experience and tradition of excellence were inculcated into Evergreen’s own ‘quality without compromise’ motto. Evergreen’s own firefighting expertise began with the founding of Evergreen Helicopters, Inc. (EHI) which, since 1960, has developed new application-specific aircraft configurations for fire suppression missions.

Evergreen choose the Boeing 747 for the Supertanker. We believe that the next generation airtanker should be a currently manufactured turbine powered aircraft certified under transport category standards.

In contrast to today’s airtankers, the Supertanker will fly within the Boeing 747’s original design envelope. Boeing has worked with Evergreen to support the preliminary engineering studies and certification of components of the 747 Supertanker program. Based on those studies, Boeing supports the concept and capability of the 747 to perform aerial applications.

The Supertanker concept also seeks to elevate aerial firefighting safety and training standards. Evergreen feels an airtanker crew training program formatted under FAR Part 121 and involving both simulator and ground training should be realized. This training would be enhanced to address the unique operating environment and characteristics of air tanker crews. In addition, by providing the flight crew with a pressurized aircraft equipped with autopilots, improvements will be realized related to crew stress and fatigue.

The Supertanker will bring to the aerial firefighting industry a patented pressurized drop capability, which is another significant safety benefit of the Evergreen program. This allows the aircraft to drop at higher altitudes while keeping within the aircraft’s design envelope.

Also, the Supertanker, even with approximately 20,000 gallons of retardant, is still 150,000 lbs below its maximum takeoff weight capacity. This provides an enhanced safety margin. Current airtankers takeoff at allowable maximum certified takeoff weight, leaving no margin for error. The weight of a fully loaded Supertanker aircraft is still below the maximum landing weight. This means there will never be a mission where pilots will have to dump the entire load, even if the aircraft is full, before landing.

How can a plane the size of a Boeing 747 fly low enough to be an effective firefighting tool?
Current firefighting aircraft use a gravity drop system. Quite simply, this means they have tanks with doors that open and discharge the aircraft’s contents. This type of system requires an aircraft to fly very low, around 200 ft. It is very dangerous work; especially since the majority of air tankers used in the U.S. are vintage World War II era aircraft designed for high-altitude bombing missions.

Evergreen’s Supertanker utilizes a new type of pressurized system allowing the aircraft to fight fire from higher altitudes. Depending on mission requirements, the Supertanker’s versatile application system can disperse retardant under high pressure, for an overwhelming response, or drop retardant equivalent to the speed of falling rain. The system was designed to allow the Evergreen Supertanker to fly at a very safe altitude, 300 to 600 ft, and within its design envelope. Also, the Evergreen Supertanker’s tank system allows segmented drops. This means that the aircraft can drop its approximately 20,000 gallons at multiple intervals while in flight. 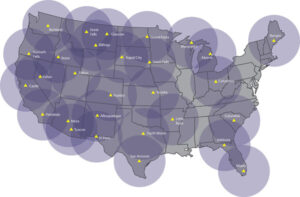 Are there any other markets for the Evergreen Supertanker? Can it operate globally?
Evergreen is studying other applications for the Supertanker. Oil spill containment, chemical decontamination and weather modification are all potential markets for this aircraft. Because the aircraft is pressurized, the Evergreen Supertanker has the capability of any long-range Boeing 747 passenger aircraft. This allows the aircraft to deploy to any international location.